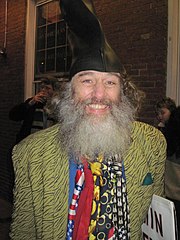 It was late December 2011.  I sat at my computer, watching the live stream of the lesser-known Republican and Democratic presidential candidates forum.  My only interest was as a citizen journalist for Wikinews,  covering the candidates the mainstream media chose to ignore. I did not expect anything out of the ordinary.

As the Democratic Party forum commenced, I noticed a bearded man dressed in green with a rubber boot on his head take the stage. I couldn’t help but laugh.  I recognized this man, having attempted earlier in the year to remove his Wikipedia entry as a frivolous candidate.  His name was Vermin Supreme, the “friendly fascist,” who had campaigned repeatedly for public offices, most notably for U.S. President in 2008, in which he received 41 votes in the New Hampshire Republican Primary and 43 votes in the general election.

At the forum, he stressed the importance of good dental hygiene, and discussing his promise to provide free ponies for all.  I realized my earlier pursuit could not have been more wrong.  This man demonstrated the absurdity of American politics: a process in which candidates whore themselves to the public, making ridiculous promises and staking positions on issues of little or no consequence.

Seeing this as a story in itself, I then witnessed Supreme outdo himself.  He proceeded to “glitter-bomb” the Christian, pro-life candidate Randall Terry, while claiming Jesus had instructed him to turn Terry into a homosexual.  This act spawned media coverage for the event, and was immortalized in The Gregory Brothers‘ early 2012 auto tune “Get Money, Turn Gay.”  In addition to the increased exposure, Supreme increased his performance from 2008, generating 833 votes in the 2012 New Hampshire Democratic Primary.

Shortly after the forum, I contacted Supreme and conducted an interview with him for Wikinews.  Part of the interview was included in the Wikinews write-up of the lesser-known candidates forum, featured in the December 2011 edition of the “On the campaign trail” series.  Afterwards, due to a change in the Wikinews e-mail server, I thought the rest of the interview had been lost.  Luckily, in recent days, I was able to uncover the full interview, which is posted below in its entirety.

William S. Saturn: Did you notify Randall Terry beforehand that you had planned to glitter bomb him?

Vermin Supreme: Altho[ugh], I have no doubt that the media savvy Mr. Terry, being every bit the media whore as myself, might willingly go along with such a stunt, this was not the case.

Altho I despise everything he stands for……..I guess we are like frenemies or something.

Obviously, we were chatting each other up before the debate, I told him. as always, it was a mixed pleasure.

You should know, that at the debate, all the candidates took to the rest room, before the stage. It is there that I offered, loudly, to have ‘homosexual gay sex’ in the lavatory stall with him. He declined.

That was, however, before the magic fairy dusting. 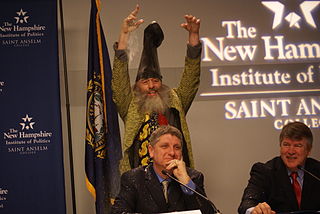 He took his glittering like a man, a gay man. I don’t know if the fairy dust turned him gay right away, but he took his medicine, and he seemed to enjoy it on some level.

Terry himself in his response blog post said, “I confess…it appeared to have no impact on me becoming homosexual…!”

Which, if I’m reading it correctly, seems to indicate he already was?

I suspect, if we meet again, it will be cordial.

I did not even know I was going to use the technique, until the night before. I was in bed, when I sorta remembered hearing about the glitter-bombing, of Newt [Gingrich]’s office, earlier in the year.

I was certainly trying to figure out something special I could do for Mr. Terry, and that popped into my head.

It beat my fallbackplan, the penis shaped water pistol I used on the Springer Show.

It was simple, elegant , and effective.

In retrospect, I might have gone with a larger flake, maybe a little tinsel, but life is too short for regrets.

I tried to time it for minimum disruption of the proceedings.

It was the confluence of circumstances:

You should also know that I am seeking Secret Service protection, based on what I believe is a credible threat made against me, immediately after the debate, by one of Mr. Terry’s supporters.

The man repeated his threats against me, to others in the auditorium. My dear mother had to witness this, and be frightened for her son, as a result.

William S. Saturn: Do you actually plan to write-in Terry as you said during the forum?

Vermin Supreme: It depends how gay he gets.

William S. Saturn: Would you glitter bomb President Barack Obama or any other politician if given the chance?

Vermin Supreme: Let me be perfectly clear in saying, for the record, that this was my first, and last, glitter-bombing.

My camPain is, and has been for over 20 years, heavily predicated on my ability to achieve a proximity to the frontrunner candidates.

In order to properly serve my constituents , I need  not only to get close enuf [enough] to frontrunners, to invade the photo frame, I need to be able to position myself close enuf, so that I can ask a wacky question, with the hopes of eliciting an answer.

I can tell you, this is difficult as it is, what have you, with the Boot on the head, and the Hulk fist flag crotch appendage, and such. (Speaking, of which, I call your attention to 03:52 to see my encounter with candidate Obama’s Secret Service detail. They did, in fact, declare a national Security Zone, right there and then, in order to prevent me from shaking Obama’s hand and asking a stupid question).

If I were to be pegged a serial glitter-bomber, this would be even more difficult.

So my message to all the frontrunners’ campaign staff in New Hampshire:

“You should definitely let your candidate shake Vermin Supreme’s hand, and for sure answer some stupid question about ponies. He won’t throw glitter on you , and it will make your candidate look like a good sport. Why don’t you give him a call and make arrangements today !!!”

Thank you. My name is Vermin Supreme.