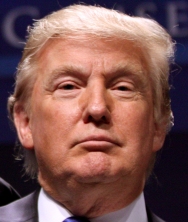 For the first time in my life, I am voting for a major party presidential candidate.  My reasoning, however, has not changed.  Tomorrow I will vote for Donald Trump for the same reasons I  voted for Ralph Nader in 2004, Chuck Baldwin in 2008, and Gary Johnson in 2012.  I am voting against the corrupt, globalist establishment that has ruled this country for decades and left us in a state of economic stagnation, never-ending war, and social degradation.

Trump is not a Republican in the mold of Mitt Romney, John McCain, or George W. Bush.  His connections to the GOP have been tenuous at best.  For the majority of his life, Trump has been a Democrat; an association of convenience for a New York City businessman.  Rather, when Trump first went through the motions of campaigning and considered a presidential run in 2000, he did not choose the Democratic or Republican parties.  He chose the Reform Party; the party of Ross Perot, the most successful independent presidential candidate of this generation.  During that run, Trump palled around with Minnesota Governor Jesse Ventura, himself a major third party figure.  Trump and Ventura even held a press conference together in which they attacked the Commission on Presidential Debates’ inclusion standard.

Historically when Trump takes a public stance it is often on the political fringe.  He has publicly opposed free trade deals since the 1980s, called for the impeachment of President George W. Bush in 2008, and questioned the citizenship of President Barack Obama in 2011.  That citizenship issue, along with slow economic growth, and red meat like illegal immigration, which Trump threw out in his campaign announcement, encouraged everyday Republicans, Republican-leaners, and Independents to embrace Trump’s 2016 run.  These were the people who pushed him over the top and helped him win the nomination, despite the best efforts of establishment Republicans.  The establishment tried everything to stop Trump because of his outsider status, politically incorrect statements, and lack of political experience.  Trump effectively won the Republican nomination as an Independent, and that independence is exactly why I want him to be president.

Trump is the first major party nominee since Wendell Willkie to have not previously held elected office, served as a cabinet secretary, or a general.  Because he is not a political insider and because he has a mass fortune of his own, he is not beholden to special interests.  He is not bought and paid for by Wall Street or foreign governments.  As a result, he is excoriated constantly in the corporate-run media, which Trump wears as a badge of honor.  Trump best exemplifies Ralph Nader’s “enlightened billionaire” needed to break the cycle of cronyism in the political establishment.  Nader initially called Trump “a breath of fresh air,” but has since soured on him for having non-progressive views.  Other duopoly opponents have been more supportive.  The highly-respected Loyola University economics professor Dr. Walter Block formed “Libertarians for Trump.”   Alex Jones, Chris Cantwell, and Justin Raimondo are among the many libertarians who have expressed support for Trump.  2012 Libertarian presidential candidates Bill Still and RJ Harris, as well as 2008 Libertarian vice presidential nominee Wayne Allyn Root, back Trump as well.  Support for Trump is so high among libertarians that Libertarian National Committee chairman Nicholas Sarwark sent out a press release asking Trump supporters to vote for Libertarians down-ticket. I, personally plan to do this.  Trump’s support extends to others in third party politics as well.  2000 Reform Party presidential nominee Pat Buchanan is a supporter, as is 2012 Constitution Party presidential nominee Virgil Goode. 2012 Peace and Freedom Party presidential nominee Roseanne Barr has praised him.  In August, Trump became a bona fide third party candidate when he received the American Independent Party’s presidential nomination.  Among independent voters such as myself,  Trump holds a healthy lead over his opponents.  With these voters, policy makes all the difference.

Trump’s political positions are a step up from his opponents and past Republicans.  For example, while previous Republican tickets and the Hillary Clinton and Gary Johnson campaigns pander to neoconservatives, Trump promotes an “America First” foreign policy.  This entails abandonment of the Wilsonian Doctrine that America must make the world “safe for Democracy.”  This has mired the nation in near-constant warfare since the First World War and has entangled us in international alliances in defiance of the wisdom in George Washington’s Farewell Address.  Under Trump, neoconservative nation building will end.  No longer will we waste our blood and treasure to exchange dictators for instability.  No longer will we be the policeman of the world, involving ourselves in others’ disputes.  No longer will we enter into trading and military pacts that benefit other nations above our own.

Trump is the best chance we’ve had to sweep out the establishment since Ross Perot in ’92. Let’s not squander this opportunity.  If you’re tired of establishment duopoly rule, please join me tomorrow in voting for Donald Trump, the true outsider.

5 comments on “Backing the True Outsider”