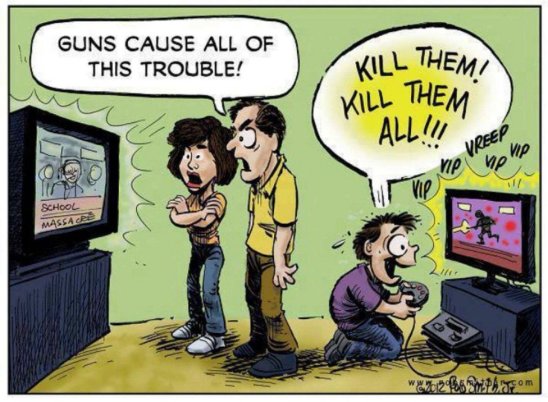 Gun control has become a cyclical issue.  A horrific shooting occurs.  The usual suspects vociferously demand gun control.  Then, after a period of time, we move on to other topics.  The recent Parkland school shooting seems different.  Some survivors are highly visible activists.  They add a human face to the cause.  The news media has deified the loudest of these activists, and placed them beyond criticism.  However, if we remember correctly, Sandy Hook too felt different in its immediate aftermath.  Because the victims were mostly young children, it was thought the ethos would lead to further laws restricting gun ownership.  In the end, though, the ultimate result was no different than any other mass shooting.  This time, notwithstanding a bill to raise the minimum age to purchase certain weapons, there likely will be no further action as well.  The cycle will continue unobstructed as it has.

On this path, this cycle will continue, until weapons, of all kinds, are removed entirely from society.  That will not happen, and rightfully so.  The Second Amendment right to bear arms is paramount to a free society.  If that means mass shootings consequently result, so be it.  Nevertheless, the right to bear arms, which has been protected in this nation since its founding, does not breed the mindset that leads someone to commit an atrocity like that in Parkland.  These mass shootings are becoming more commonplace but that is not the result of a right we have always enjoyed as Americans.  Something else is going on, likely in the decadence of our culture.

To address the issue of violent episodes, we need a better understanding of what actually causes troubled individuals to snap in such a way.  Could it be violent video games?  Violent movies or TV shows?  Psychotropic drugs?  Social media?

The answer is not clear at the moment.  Rather than perpetuate the vicious cycle of the gun control narrative and/or the total abandonment of Second Amendment rights, our leaders would best serve the past victims of gun violence and the potential victims of gun violence (all of us) by identifying the exact cause or causes of the particular mental state of a mass shooter.  This can be a starting point for formulating a plan to combat it.  Only then can we break the cycle and maintain our natural rights.

4 comments on “The Vicious Cycle”