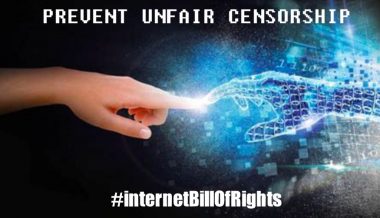 Milo Yiannopolus, Roger Stone, Paul Nehlen, Jared Taylor, Baked Alaska, Ricky Vaughn, and thousands of supposed “Russian bots” are just a few of those Twitter has permanently banned, seemingly for expressing unpopular political viewpoints.  Wikipedia chronicles the various prominent accounts Twitter has banned and suspended.  Nearly all belong to right wingers.  Internet viewpoint discrimination goes beyond Twitter. YouTube (Google) routinely deletes accounts and videos of right wingers, particularly in the aftermath of the Parkland school shooting.  The problem of Internet censorship is also not isolated to social media.  Most notably, after featuring a joke about the woman who died at the Charlottesville protests, Andrew Anglin’s popular site The Daily Stormer has had to jump from host to host, prompting concerns among civil libertarians.  Once a last refuge for free speech, the Internet has become increasingly less so.  Perhaps we have reached the breaking point.  Is it time to adopt an Internet Bill of Rights to protect our God-given right of free speech on the web? END_OF_DOCUMENT_TOKEN_TO_BE_REPLACED